The Cosmatesque style takes its name from the family of the Cosmati, which flourished in Rome during the twelfth and thirteenth centuries and practiced the art of mosaic. The Cosmati work has this peculiarity, that it is a glass mosaic used in combination with marble. At times it is inlaid on the white marble architraves of doors, on the friezes of cloisters, the flutings of columns, and on sepulchralmonuments. Again, it frames panels, of porphyry or other marbles, on pulpits, episcopal chairs, screens, etc., or is itself used as a panel. The color is brilliant — gold tesserae being freely used. While more frequent in Rome than elsewhere, its use is not confined to that city. Among other places it is found in the Cappella Palatina in Palermo. Just what its connection may be with the southern art of Sicily has yet to be determined.

Although the Cosmati of 12th Century Rome are the eponymous craftsmen of the style, they do not seem to have been the first to develop the art. A similar style may be seen in the pavement of the Benedictine abbey of Monte Cassino (1066-1071), built using workers from Constantinople, making it likely that the geometric style was heavily influenced by Byzantine floor mosaics. However, the technique is different because Cosmati floors were made from many different size and shape pieces of stone, a technique quite different from opus tessellatum mosaics where the patterns are made from small units which are all the same size and shape. The stone used by the cosmati artists were salvaged material from the ruins of ancient Roman buildings, the large roundels being the carefully cut cross sections of Roman columns.

According to the Catholic Encyclopedia, this style of inlaid ornamental mosaic was 'introduced into the decorative art of Europe during the twelfth century by a marble-worker named Laurentius [also known as 'Lorenzo Cosmati', a native of Anagni, a small hill-town thirty-seven miles east-south-east of Rome. Laurentius acquired his craft from Greek masters and for a time followed their method of work, but early in his career developed an original style. Freeing himself from Byzantine traditions and influences, Laurentius's style evolved into a decorative architectural mosaic, vigorous in colour and design, which he employed in conjunction with plain or sculpted marble surfaces.

Odo of Bayeux (died 1097), Earl of Kent and Bishop of Bayeux, was the half-brother of William the Conqueror, and was, for a time, second in power after the King of England.

Odo was the son of William the Conqueror's mother Herleva and Herluin de Conteville. Count Robert of Mortain was his younger brother. There is uncertainty about his birth date. Some historians have suggested he was born around 1035. Duke William made him bishop of Bayeux in 1049. It has been suggested that his birth was as early as 1030, making him about nineteen rather than fourteen at the time.

Norman Conquest and after

Although Odo was an ordained Christian cleric, he is best known as a warrior and statesman, participating in the Council of Lillebonne. He found ships for the Norman invasion of England and is one of the very few proven companions of William the Conqueror, known to have fought at the Battle of Hastings in 1066. The Bayeux Tapestry, probably commissioned by him to adorn his own cathedral, appears to labour the point that he did not actually fight, that is to say shed blood, at Hastings, but rather encouraged the troops from the rear. The Latin annotation embroidered onto the Tapestry above his image reads: 'Hic Odo Eps [Episcopus] Baculu[m] Tenens Confortat Pueros', in English 'Here Odo the Bishop holding a club strengthens the boys'. It has been suggested that his clerical status forbade him from using a sword, though this is doubtful: the club was a common weapon and used often by leadership including by Duke William himself, as also depicted in the same part of the Tapestry. Odo was accompanied by William the carrier of his crozier and a retinue of servants and members of his household.

In 1067, Odo became Earl of Kent, and for some years he was a trusted royal minister. On some occasions when William was absent (back in Normandy), he served as de facto regent of England, and at times he led the royal forces against rebellions (e.g. the Revolt of the Earls): the precise sphere of his powers is not certain. There are also other occasions when he accompanied William back to Normandy.

During this time Odo acquired vast estates in England, larger in extent than anyone except the king: he had land in twenty-three counties, primarily in the south east and in East Anglia. 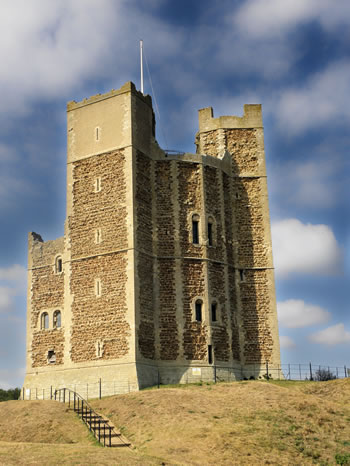 Orford Castle is a castle in the village of Orford, Suffolk, England, located 12 miles (20 km) northeast of Ipswich, with views over the Orford Ness. It was built between 1165 and 1173 by Henry II of England to consolidate royal power in the region. The well-preserved keep, described by historian R. Allen Brown as 'one of the most remarkable keeps in England', is of a unique design and probably based on Byzantine architecture. The keep still stands among the earth-covered remains of the outer fortifications.

Prior to the building of Orford Castle, Suffolk was dominated by the Bigod family, who held the title of the Earl of Norfolk and owned key castles at Framlingham, Bungay, Walton and Thetford. Hugh Bigod had been one of a group of dissenting barons during the Anarchy in the reign of King Stephen, and Henry II wished to re-establish royal influence across the region. Henry confiscated the four castles from Hugh, but returned Framlingham and Bungay to Hugh in 1165. Henry then decided to build his own royal castle at Orford, near Framlingham, and construction work began in 1165, concluding in 1173. The Orford site was around two miles (3.2 km) from the sea, lying on flat ground with swampy terrain slowly stretching away down to the river Ore, about half a mile (0.8 km) away.

The design of the keep was unique, and has been termed 'one of the most remarkable keeps in England' by historian R. Allen Brown. The 90-foot-high (27-metre) central tower was circular in cross-section with three rectangular, clasping towers built out from the 49-foot-wide (15-metre) structure. The tower was based on a precise set of proportions, its various dimensions following the one-to-the-root-of-two ratio found in many English churches of the period. Much of the interior is built with high-quality ashlar stonework, with broad, 5-foot-6-inch-wide (1.7-metre) staircases. The best chambers were designed to catch the early morning sun, whilst the various parts of the keep were draught-proofed with doors and carefully designed windows. Originally the roof of the keep, above the upper hall, would have formed a domed effect, with a tall steeple above that.