You can find here a list of previous events in chronological order. Upcoming society events can be found here. 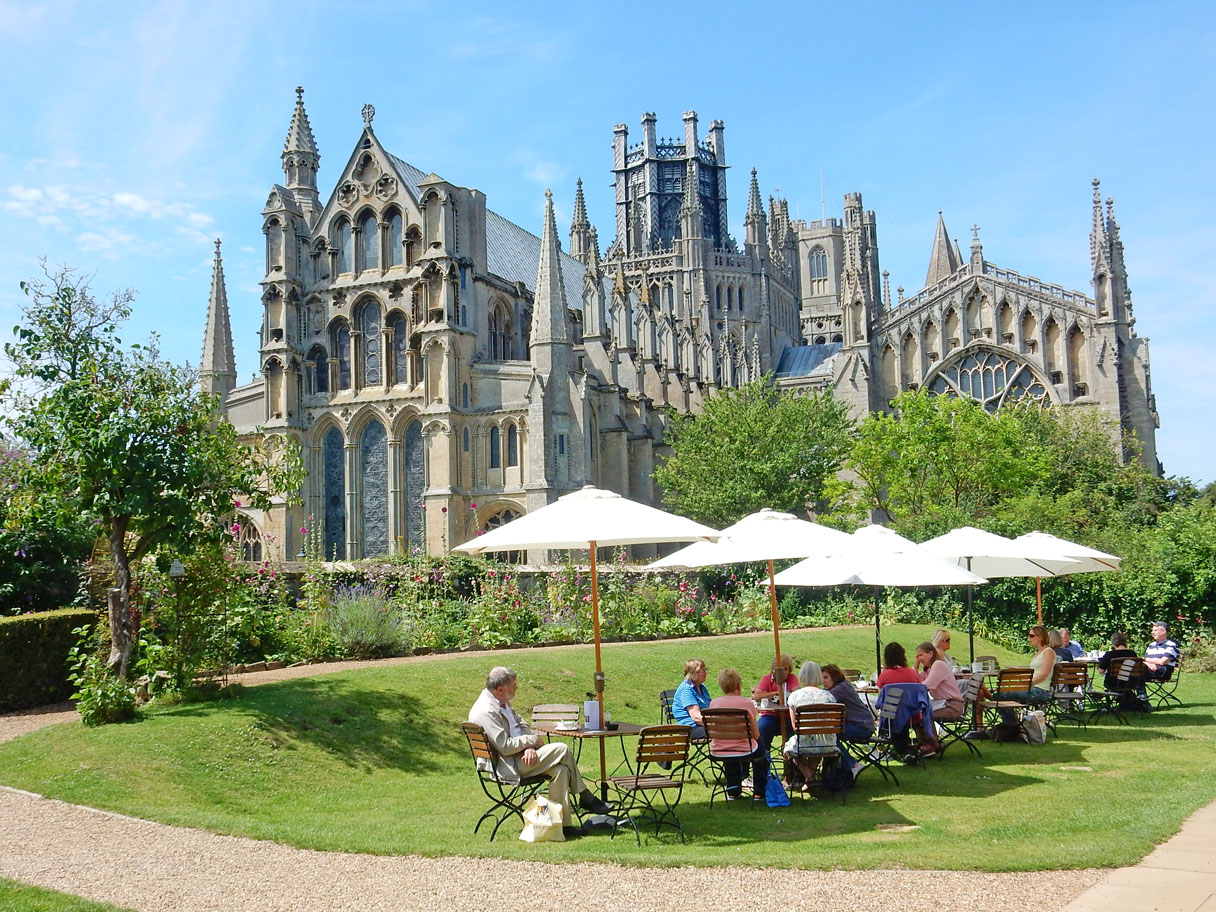 The city's origins lay in the foundation of an abbey in 673, one mile (1.6 km) to the north of the village of Cratendune on the Isle of Ely, under the protection of Saint Etheldreda, daughter of King Anna. This first abbey was destroyed in 870 by Danish invaders and rededicated to Etheldreda in 970 by Ethelwold, Bishop of Winchester.[25] The abbots of Ely then accumulated such wealth in the region that in the Domesday survey (1086) it was the 'second richest monastery in England'. The first Norman bishop, Simeon, started building the cathedral in 1083. The octagon was rebuilt by sacrist Alan of Walsingham between 1322 and 1328 after the collapse of the original nave crossing on 22 February 1322. Ely's octagon is considered 'one of the wonders of the medieval world'. Architectural historian Nikolaus Pevsner believes the octagon 'is a delight from beginning to end for anyone who feels for space as strongly as for construction' and is the 'greatest individual achievement of architectural genius at Ely Cathedral'.

The bus will leave from outside the Post Office at 9am. We will have a guided tour with Professor Snape.

Tickets are available from Sandra on 01206 123456 or by sending us an application form.

The cloth consists of some fifty scenes with Latin tituli, embroidered on linen with coloured woollen yarns. It is likely that it was commissioned by Bishop Odo, William's half-brother, and made in England—not Bayeux—in the 1070s. In 1729 the hanging was rediscovered by scholars at a time when it was being displayed annually in Bayeux Cathedral. The tapestry is now exhibited at the Musée de la Tapisserie de Bayeux in Bayeux, Normandy, France (49.2744°N 0.7003°W).

The designs on the Bayeux Tapestry are embroidered rather than woven, so that it is not technically a tapestry. Nevertheless, it has always been referred to as a tapestry until recent years when the name 'Bayeux Embroidery' has gained ground among certain art historians. It can be seen as a rare example of secular Romanesque art. Tapestries adorned both churches and wealthy houses in Medieval Western Europe, though at 0.5 by 68.38 metres (1.6 by 224.3 ft, and apparently incomplete) the Bayeux Tapestry is exceptionally large. Only the figures and decoration are embroidered, on a background left plain, which shows the subject very clearly and was necessary to cover large areas.

On 18 January 2018, French President Emmanuel Macron announced that the Bayeux Tapestry would be loaned to Britain for public display. It is expected to be exhibited at the British Museum in London, but not before 2020. It will be the first time that it has left France in 950 years. 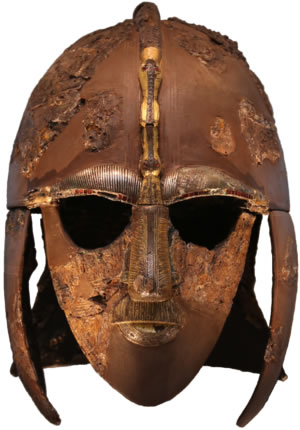 The Sutton Hoo helmet is a decorated Anglo-Saxon helmet which was discovered during the 1939 excavation of the Sutton Hoo ship-burial. It was buried around 625 and is widely believed to have been the helmet of King Raedwald of East Anglia, and its elaborate decoration may have given it a secondary function akin to a crown. The helmet is 'the most iconic object' from 'one of the most spectacular archaeological discoveries ever made,' and one of the most important Anglo-Saxon artefacts ever found. Its visage features eyebrows, nose, and moustache, creating the image of a man joined by a dragon's head to become a soaring dragon with outstretched wings. It has become a symbol of the Dark Ages and also 'of Archaeology in general.' It was excavated as hundreds of rusted fragments, and was first displayed following an initial reconstruction in 1945-46, and then in its present form after a second reconstruction in 1970-71.

A wicker copy of the helmet on display at the Museum of English Rural Life in Reading, Berkshire

The 1971 reconstruction of the Sutton Hoo helmet was widely celebrated, and in the five decades since it has come to symbolise the Middle Ages, archaeology, and England. It is depicted on the covers of novels, textbooks, and scholarly publications, such as The Winter King by Bernard Cornwell and The Anglo-Saxons by James Campbell, and has influenced artists, filmmakers and designers. At the same time, the helmet has become the face of a time once known as the Dark Ages, but now recognised for its sophistication in part because of the finds from Sutton Hoo and referred to as the Middle Ages. It gives truth to a period of time known from depictions of warriors and mead halls in Beowulf, once thought fanciful, and personifies the Anglo-Saxons in post-Roman Britain. Considered 'the most iconic object'  from an archaeological find hailed as the 'British Tutankhamen,' in 2006 it was voted one of the 100 cultural icons of England alongside the Queen's head stamp, the double-decker bus, and the cup of tea. 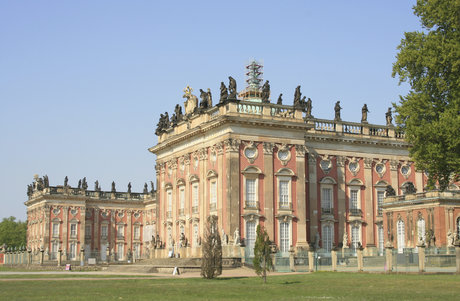