The best known relic associated with Offa's time is Offa's Dyke, a great earthen barrier that runs approximately along the border between England and Wales. It is mentioned by the monk Asser in his biography of Alfred the Great: 'a certain vigorous king called Offa ... had a great dyke built between Wales and Mercia from sea to sea'. The dyke has not been dated by archaeological methods, but most historians find no reason to doubt Asser's attribution. Early names for the dyke in both Welsh and English also support the attribution to Offa. Despite Asser's comment that the dyke ran 'from sea to sea', it is now thought that the original structure only covered about two-thirds of the length of the border: in the north it ends near Llanfynydd, less than five miles (8 km) from the coast, while in the south it stops at Rushock Hill, near Kington in Herefordshire, less than fifty miles (80 km) from the Bristol Channel. The total length of this section is about 64 miles (103 km). Other earthworks exist along the Welsh border, of which Wat's Dyke is one of the largest, but it is not possible to date them relative to each other and so it cannot be determined whether Offa's Dyke was a copy of or the inspiration for Wat's Dyke. 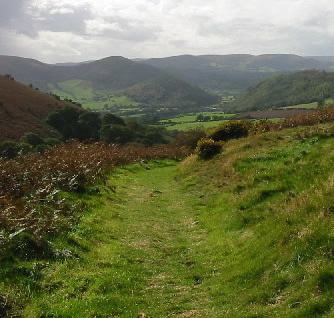 The construction of the dyke suggests that it was built to create an effective barrier and to command views into Wales. This implies that the Mercians who built it were free to choose the best location for the dyke. There are settlements to the west of the dyke that have names that imply they were English by the 8th century, so it may be that in choosing the location of the barrier the Mercians were consciously surrendering some territory to the native Britons. Alternatively it may be that these settlements had already been retaken by the Welsh, implying a defensive role for the barrier. The effort and expense that must have gone into building the dyke are impressive, and suggest that the king who had it built (whether Offa or someone else) had considerable resources at his disposal. Other substantial construction projects of a similar date do exist, however, such as Wat's Dyke and Danevirke, in what is now Germany as well as such sites as Stonehenge from millennia earlier. The dyke can be regarded in the light of these counterparts as the largest and most recent great construction of the preliterate inhabitants of Britain.